In our previous post, we wrote about the official beginning of the winter season. Nation Public Radio's "The Picture Show" reminded us of a truly iconic photograph, one that only could have been made on the shortest day of the year, on a fleeting moment when the city was slightly darkened, but the office lights remained on. 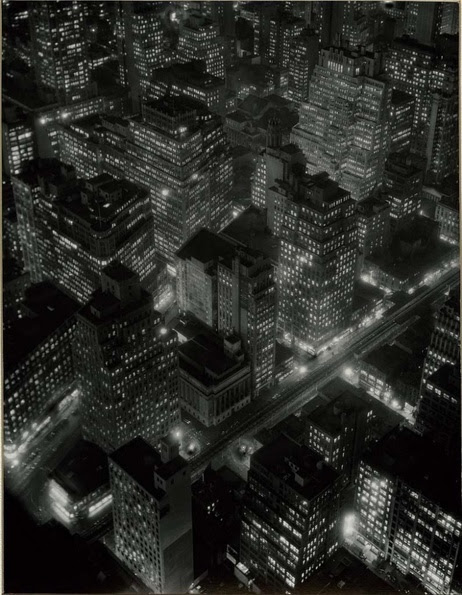 Between 4:30 and 5 p.m. on Dec. 20, 1934, Berenice Abbott's camera was hanging off an upper floor of the Empire State Building recording New York City at Night.

With a fixed artistic vision, the location scouted and exposure calculated for fifteen minutes, the independently-minded photographer captured that fleeting moment when the city was slightly darkened, but the office lights remained on.


For some, this photograph, though some 76 years old, may seem somewhat familiar with its dramatic angles, hovering perspective and workers still in their offices after dark. But for Abbott, it represented the emerging of the modern New York and new lifestyles that came with it.

Abbott was born in 1898 in Springfield, Ohio, and moved to New York in 1919. Frustrated by the commercialism and politics threatening her Greenwich Village bohemian lifestyle (like Prohibition), and intrigued by the artistic and literary of circles of Paris, she moved in 1921. Her eight years in Paris were pivotal in shaping her as a photographer.

She was versed in sculpture, drawing and writing, but it was during her employment in Man Ray's photography studio that she learned to make photographs. Ray (1890-1976) ran a famous portrait studio but in his spare time was at the vanguard of surrealist photography. He challenged the conventional approaches to photography, which provided Abbott with opportunities to become a successful portrait photographer in her own right. He also introduced her to Eugene Atget (1857-1927), a photographer noted for tirelessly documenting the architecture, urban views and landscapes of Paris.

The modernist tendency to see the city as a valid subject and as a scene for formal studies — and the appreciation for long-term documentary work — were both visible trends in Abbott's photography by the time she returned to America in Jan. 1929.

It might be difficult for our contemporary eyes and city experiences to allow us to imagine Abbott's New York City at Night as a new view of the world. In 1932, the Great Depression was still plaguing many Americans. And the Farm Security Administration was about to create a vision of America that remains seared into a shared visual history — with photos from the field like Migrant Mother.

But Abbott's cityscape offers a perspective of excitement about American technological achievements — through her ability to blend cubist visual constructions with the reality of urban modern architecture. The photograph also holds some of the romance and mystery of the night that Ella Fitzgerald sings about in Cole Porter's song, All Through The Night, from the musical Anything Goes.

This image, perhaps her most well-known, remains a visually exciting image with complex rhythms that might offer our jaded eyes a way to see the city with refreshed excitement.

Abbott's enthusiasm for documenting New York City resulted in an extraordinary documentary project that can be explored in her book Changing New York. Many of those photographs can be seen at the Museum of the City of New York, where Abbott left her archive.

The Smithsonian's Archive of Art also holds many documents related to the Federal Art Project that funded the massive photography project and Abbott’s assistant Elizabeth McCausland's papers. Abbott's legacy also continues through a photography award in her name that is given to emerging photographers with a body of work waiting to be published.

Shannon Thomas Perich is an associate curator of the Photographic History Collection at Smithsonian's National Museum of American History. Her regular contributions to The Picture Show are pulled from the Smithsonian's archives. See the original NPR article here.
Posted by Monroe Gallery of Photography at 10:57 AM