Gallery Discussion on March 23 in conjunction with 1968 exhibit 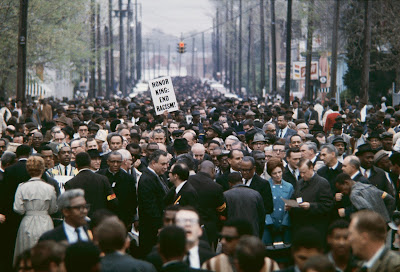 
Don E. Carleton: The Press and Photojournalism in 1968


Coincides with exhibition of photographs of historic events of 1968


Santa Fe--Monroe Gallery of Photography, 112 Don Gaspar, is pleased to present a special Gallery discussion with Don E. Carleton: “The Press and Photojournalism in 1968” on Friday, March 23, from 5-7 PM. The talk will start promptly at 5:30 PM in the gallery, seating is limited and is first come, first seated.


The gallery discussion coincides with the exhibition “1968: It Was Fifty Years Ago Today” . The year 1968 marked many changes for the United States. It signaled the end of the Kennedy-Johnson presidencies, the pinnacle of the civil rights movement, the beginning of Women’s rights and Gay rights, and the beginning of the end of the war in Vietnam. More than that, it meant a change in public attitudes and beliefs. Photojournalism had a dominating role in the shaping of public attitudes at the time.

One of the consequences of the reporting in Vietnam was to make military leaders determined never to give journalists such free rein; the Nixon Presidency ushered in an era of press secrecy; photographs capturing anti-war protests, chaos outside the Democratic National Convention in Chicago, and of the campaigns and assassinations of Martin Luther King and Robert F. Kennedy became iconic markers of the year. Dr. Carleton will discuss these topics and explore the importance of news and documentary photography in general as sources for historical research and for giving us a window into the past unequalled by other sources.


Dr. Don Carleton has been executive director of The University of Texas at Austin's Dolph Briscoe Center for American History since its creation in 1991. Dr. Carleton has published and lectured extensively in the fields of historical research, the history of broadcast journalism, and Twentieth Century U.S. political history.


The exhibition continues through April 15, 2018. Gallery hours are 10 to 5 daily. Admission is free.
Posted by Monroe Gallery of Photography at 12:46 PM No comments: 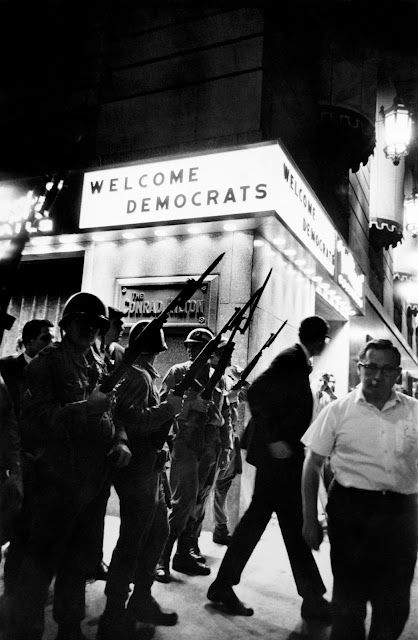 Monroe Gallery of Photography, 112 Don Gaspar, is pleased to present “1968: It Was Fifty Years Ago Today”, a major exhibition featuring more than 50 photographs from one of the most tumultuous years in United States history. The exhibition opens Friday, February 2 and will continue through April 15


The year 1968 marked many changes for the United States. It signaled the end of the Kennedy-Johnson presidencies, the pinnacle of the civil rights movement, the beginning of Women's rights and Gay rights, and the beginning of the end of the war in Vietnam. More than that, it meant a change in public attitudes and beliefs. Photojournalism had a dominating role in the shaping of public attitudes at the time. Now, the exhibition comes amid a time of heightened awareness from political, racial, and social tensions.

The year started with the Viet Cong opening the Tet Offensive by attacking major cities of South Vietnam, a move that triggered President Lyndon B. Johnson's call for peace negotiations. Johnny Cash recorded "Live at Folsom Prison", Eddie Adams photographs a Viet Cong officer as he is executed by Nguyen Ngoc Loan, a South Vietnamese National Police Chief. This photograph made headlines around the world, eventually winning the 1969 Pulitzer Prize, and sways U.S. public opinion against the war. On March 16, the Mai Lai massacre further shocks the nation, and on March 31st, President Lyndon B. Johnson surprised the nation by choosing not to run for reelection. On April 4th, civil rights leader Martin Luther King, Jr. was shot and killed in Memphis, Tennessee, leading to riots in Washington, D.C. and other cities. In late April, student protesters at Columbia University in New York City take over administration buildings and shut down the university, only one of many college protests that would unfold across the county.

In June, Robert F. Kennedy, former U.S. attorney general and U.S. senator from New York, was assassinated in Los Angeles while campaigning for the Democratic Presidential nomination, and Bill Eppridge records a lone busboy trying to comfort Kennedy as he lays sprawled on the kitchen floor of the Ambassador Hotel. In August, the Democratic National Convention in Chicago was marred by clashes between Vietnam War protesters and Mayor Daley's police force. At Mexico City's Summer Olympic Games, African American sprinters Tommie Smith and John Carlos won gold and bronze medals, then bowed their heads and raised clenched fists during the playing of the U.S. national anthem in protest of U.S. racism. And in November, as the Beatles' "White Album" is released Richard Nixon was elected President with running mate Spiro Agnew, making one of the most extraordinary political comebacks in U.S. history. Finally, in December, Elvis Presley's "1968 Comeback Special" airs on NBC television and Apollo 8 enters orbit around the moon.

In culture, Barbarella, Funny Girl, 2001: A Space Odyssey, Planet of the Apes, Rosemary's Baby, and Yellow Submarine dominate the box office; the Fillmore East opens in New York, Hair opens on Broadway, and "Hey Jude" by the Beatles and "Jumpin' Jack Flash by The Rolling Stones top the music charts.

Posted by Monroe Gallery of Photography at 12:33 PM No comments: