For over 70 years, American photographer Art Shay has documented life, combining his gifts of storytelling, humor and empathy. Born in the Bronx, New York, in 1922, Art Shay has pursued photography since his teens, and he took his first Leica to war with him. His first published photographs—documenting a midair collision over his English Air Base—were printed in a September 1944 issue of Look magazine. In fact, during World War II, he was then lead navigator on 30 missions in the Eighth Air Force. His service, which also includes 23 combat supplies missions, earned him five Air Medals, the Distinguished Flying Cross and the French Croix de Guerre.
Upon returning to civilian life, Shay then wrote Sunday features for the Washington Post before becoming a staff reporter for Life magazine. In San Francisco at age 26, he became Life’s youngest bureau chief. His specialty was story ideas and he wrote text and captions for photographers such as Alfred Eisenstaedt, Peter Stackpole, Wallace Kirkland and Francis Miller.

Shay moved to Chicago in late 1948. A longtime fan of literature, he befriended novelist Nelson Algren, the winner of the first National Book Award for Fiction. Throughout the 1950s, they wandered Chicago documenting Algren’s “rusty heart” neighborhoods. And there are portraits of other novelists. “The first author I ever shot was Ernest Hemingway,” he says. “I was given the job of escorting Ernest around our base because I was the only one around who knew his work.”

In 1951, Shay left his staff position at Life magazine and became a freelance photographer. He found success shooting for major magazines including Life, Time, The New York Times Magazine, and more. Shay earned a reputation for getting the shots editors wanted. As former editor of Life and Fortune Roy Rowan put it: “Art Shay’s extraordinary talent lies in capturing the human spirit of all those who come before his lens.”

Shay’s images range from photographs of nine US Presidents, to the early 1960s Post cereal box baseball card photographs, to a forty-year ongoing essay of a local shopping mall. He is the author of nearly 70 books, including several dozen nonfiction children’s books. His last formal assignment was in 1988, when he shot the night the lights went on at Wrigley Field for Time Magazine. He is first of all a wanderer of the different streets throughout the United States, as one picture of the streets of Chicago in 1950 shows it. “I took this street montage near 26th and California Ave,” he recalls. “It’s a lovely accident, created by a mis-wound Super Ikonta B. The Super Ikonta B's main feature was an 80mm lens that focused through a range finder and you focused it by turning around one element.  I was playing around with the camera because I thought it was peculiar that it took 11 shots on a roll.  I shot this, essentially four frame, montage while shooting out from my 1949 Pontiac car window.”

"Marlene Dietrich: Dressed for the Image” exhibit at the National Portrait Gallery in Washington

Monroe Gallery of Photography is pleased to have contributed this vintage print from Gallery photographer Irving Haberman to the "Marlene Dietrich: Dressed for the Image” exhibit at the National Portrait Gallery in Washington: 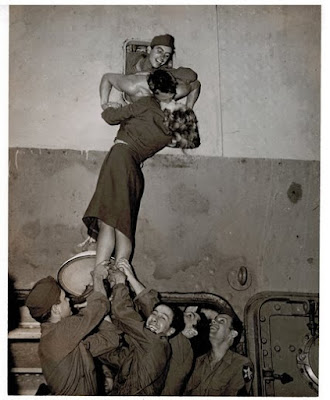 The New York Times also featured the image in their review of the exhibit, on view through April 15, 2018.

Marlene Dietrich in Photos: A Study in Contrasts

Posted by Monroe Gallery of Photography at 4:28 PM No comments:

Pfc. Tony Vaccaro played two roles during WWII: combat infantryman and unofficial photographer. At great personal risk, he shot and developed 8,000 photographs from the front lines that showed the camaraderie, the bravery and the tragedy of war – in a way no one had done before. Directed by Max Lewkowicz. An HBO Film. 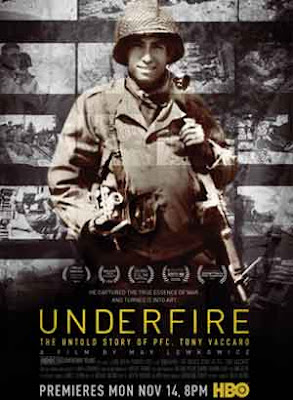 Directed by Max Lewkowicz (the New York Emmy-winning Morgenthau), UNDERFIRE: The Untold Story of PFC. Tony Vaccaro is the remarkable story of WWII infantryman and photographer Tony Vaccaro, who created one of the most comprehensive, haunting and intimate photographic records of combat.

Through interviews with Pulitzer Prize-winning photographers and Vaccaro himself, this moving film examines issues raised by witnessing and recording conflict, following him as he retraces his journey across Europe as a soldier, sharing the stories behind some of his most powerful pictures along the way.

Engrossing, unexpectedly moving..." -Kenneth Turan, Los Angeles Times
"Tony Vaccaro's life was forged by pain and courage. Passion saved his life and enriched ours." - Tim Van Patten, director Game of Thrones, The Sopranos
"No one got closer than an infantryman in war, and no one got closer than Tony." -Alex Kershaw, Historian and New York Times best-selling author, "The Liberator"

Monroe Gallery of Photography is pleased to represent the fine art photography of Tony Vaccaro. "Tony Vaccaro at 95" will be on view in the gallery November 24 - January 21, 2018.

Posted by Monroe Gallery of Photography at 5:36 AM No comments:

The Briscoe Center invites you to a Texas Book Festival panel discussion of:

"Eddie Adams: Bigger than the Frame"
A Co-publication of the Briscoe Center and the University of Texas Press

Moderator: Don Carleton
Panelists: Alyssa Adams and Anne Wilkes Tucker
Location: The Contemporary Austin–Jones Center
...
Drawn from the Briscoe Center's Eddie Adams Photographic Archive, "Bigger Than the Frame" presents a career-spanning selection of a renowned photographer's finest work. In addtion to Adams's much-praised Vietnam War photography, the book includes images that uncannily reflect the world and domestic issues of today, including immigration, conflict in the Middle East, and the refugee crisis. They attest to Adams's overwhelming desire to empathize with others and tell their stories–as he once observed, "I actually become the person I am taking a picture of. If you are starving, I am starving, too." Best known for Saigon Execution, his Pulitzer Prize–winning photograph that forever shaped how the world views the horrors of war, Adams won more than five hundred awards, including the George Polk Award for News Photography three times and the Robert Capa Gold Medal.

Books will be available for purchase at the event.

The Jones Center is located at Seventh Street and Congress Avenue. Street and garage parking are available nearby.

Eddie Adams' fine art prints are available from the Monroe Gallery of Photography.

Posted by Monroe Gallery of Photography at 4:44 PM No comments: 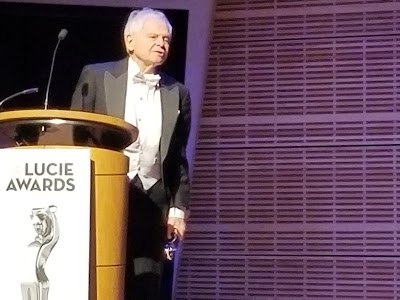 Steve Schapiro speaking after receiving the 2017 Lucie Award for Achievement in Photojournalism. Earlier this year the Gallery presented the exhibition "EYEWITNESS" to celebrate the completion of a project based on James Baldwin’s 1963 book, “The Fire Next Time”. Steve Schapiro’s photographs documenting the civil rights movement from 1963 – 1968 are paired with essays from “The Fire Next Time” by James Baldwin in a major book published by Taschen in March. The book won the 2017 Lucie Award for Book Publisher of the Year (Limited). 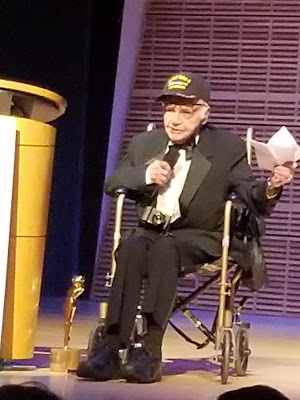 Art Shay, now 95, speaking after being honored with the Lucie statue for Lifetime Achievement during the Lucie Awards gala ceremony at Carnegie Hall in New York October 29, 2017. “Art Shay: A Tribute” is currently on view at Monroe Gallery of Photography through November 19, 2017. 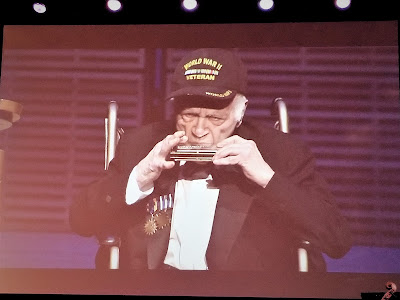 Art Shay brought the crowd to its feet with a rousing harmonica solo to conclude the evening. 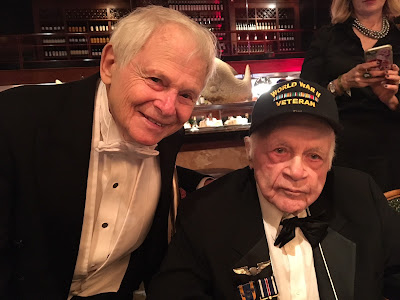 Posted by Monroe Gallery of Photography at 11:24 AM No comments: