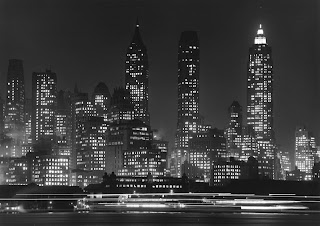 Santa Fe--Monroe Gallery of Photography, 112 Don Gaspar, is pleased to announce the exhibition “The City Of New York”, an extensive survey of more than 60 classic photographs portraying the iconic city as captured by renowned photographers. The exhibition opens with a public reception on Friday, February 6, from 5 to 7 PM. “The City Of New York” will continue through April 19.

The City, its buildings, people, streets, and the daily human experience, have been a compelling subject for photographers for over 100 years. Gathered together in this exhibition for the first time are evocative photographs made by over 30 photographers, covering the gamut from iconic and monumental to tender and personal images.
Featured in the exhibition are photographs by Berenice Abbott, Eddie Adams, Margaret Bourke-White, Cornell Capa, Ted Croner, Alfred Eisenstaedt, Vivian Cherry, Andreas Feininger, Paul Flaggmann, Ernst Haas, Brian Hamill, Bill Ray, Carolyn Schaefer, Steve Schapiro, and many, many others. Subjects photographed include the Empire State Building, The Chrysler Building, the old Pennsylvania Station, The Flatiron Building, the Statue of Liberty, Yankee Stadium, and the World Trade Towers; Babe Ruth, Jackie Robinson, John Lennon, Woody Allen; and the details of people on their daily rounds.

Visit http://www.monroegallery.com/ to view the exhibition.
Posted by Monroe Gallery of Photography at 4:34 PM 2 comments: 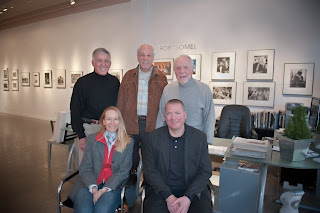 LIFE’s 28th floor photographers’ lounge may be a fading memory for some, but these days you could be forgiven for thinking the lounge had picked up and moved west, all the way to Santa Fe, NM.
LIFE Photographer Bob Gomel, Former Senior Editor of LIFE Magazine and Co-founder of PEOPLE Magazine Hal Wingo, one of the legends in American publishing, editor of LIFE magazine and numerous books, and Co- founder of "People" magazine Dick Stolley, Michelle and Sid Monroe, owners of Monroe Gallery of Photography.
Posted by Monroe Gallery of Photography at 11:03 AM No comments: 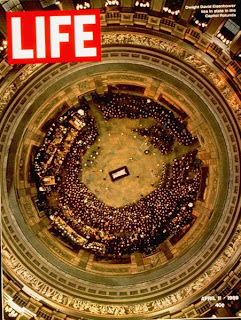 Bob Gomel in an exclusive interview with the Albuquerque Journal. Photographs are on exhibit at Monroe Gallery of Photography in Santa Fe, and at Booth # D20 at Photo LA (Los Angeles).

By Kate McGraw for the Journal

Good photographs tell stories, and for 75-year-old Bob Gomel there's a story with every photo. One of the most compelling was the cover photo for LIFE magazine that he snagged shortly before leaving the magazine for good in 1969.

The photo, a shot of former President Dwight Eisenhower's casket lying in state in the U.S. Capitol rotunda, won raves around the world. The back story began six years earlier, at the lying-in-state of the martyred President John F. Kennedy's body.

“I had covered the Kennedy campaign and the Kennedy years and had become friends with the head of the Secret Service then, a man named Arthur Godfrey — that's 'Godfrey' without the ukulele,” Gomel told the Journal in an exclusive interview. “When I was covering Kennedy's funeral, I looked around the rotunda and went up onto the second balcony to get a long, wide shot. I thought then, 'If I ever cover another state funeral here, I want to find a way to get a camera up into that 200-foot dome.' “

Six years later, when I was assigned to Eisenhower's funeral, I remembered that and called Godfrey. He said, 'Get your equipment and your assistant here in the middle of the night and don't say anything to anyone.' After all, the Capitol wasn't under the jurisdiction of the Secret Service and if the Senate officers and the Capitol police had known what we were up to, they'd have stopped us.”

Gomel and his assistant rigged a wire across the 75-foot radius of the dome, and a pulley to hold a camera held tight in a block of Plexiglas. Then they rigged another 700 feet of zip cord to a foot switch where Gomel would be standing with the rest of the press. They also put up strobe lights around the dome to light up the darkness between the top of the dome and the rotunda below. “That was a big, big worry, because the strobe lights then were unreliable. They had a tendency to start firing by themselves, which of course would have revealed what we were doing. But they didn't, thank goodness,” Gomel said.

At 2 a.m., Gomel was practicing — running the camera out to the center of the dome with one lens after another, and then sending the assistant in a race to a lab that had stayed open for him. His editor at LIFE found out what he was doing and said, “That's ridiculous. Tell him I said to get out on the street and take pictures of the people.”

Gomel ignored him. “I knew I was deliberately disobeying him and possibly jeopardizing my job, but I also knew in my gut that I was right,” Gomel said. “I kept on practicing. When they brought Eisenhower's casket in, I was ready. And when the editor saw the shot, it ended up on the cover.”

That picture and others like it are in a show at Monroe Gallery through Jan. 25. It was a show hurriedly put together when Sid Monroe learned that the Houston-based Gomel and his wife would be spending the Christmas holidays in Albuquerque because their vacation home in Galveston was destroyed by Hurricane Ike. Monroe asked Gomel to bring some prints of his most famous LIFE photographs to show. For space reasons, the gallery could only hang 10, but there are about 15 more “in the back,” Gomel said, and au courant gallery visitors have learned to ask for them.

“It's my first gallery experience, and I'm thrilled,” the veteran photographer said. “They could not have been more gracious, and people have been so complimentary. It's just been great.”

Gomel is only showing work from his 10 years at LIFE in this show, but he also is known for his work for MONEY and Fortune magazines as well. It was he who exposed the extent of Ross Perot's wealth, which the billionaire had been blurring a little in his independent run for president, when for MONEY magazine Gomel did shots of four of Perot's expensive homes. Gomel left LIFE when “the handwriting was on the wall” for the picture magazine's eventual demise. He established his own studio in New York and then Houston, doing commercial photography for major advertising. He shot VW and Audi print ads and brought the “Merrill Lynch is bullish on America” campaign to fruition.

But it is his career at LIFE that stands out in his memory. “Growing up that's all I wanted,” he said. After college and serving as a naval aviator in the Korean War, he turned down a job with The Associated Press and endured $40-per-week unemployment until he finally was hired full time by LIFE in 1959. “That was a golden era for photographers,” he said. “All the people whose images became icons — Marilyn Monroe, the Kennedys, the Beatles — I photographed them all.”
Visit http://www.monroegallery.com/ to see more of Bob Gomel's photographs.
Monroe Gallery of Photography
505.992.0800
info@monroegallery.com
Posted by Monroe Gallery of Photography at 8:51 AM No comments: