Photographs and the First Amendment. A Harrowing Journey Through U.S. Customs

In the United States, people are allowed to carry a loaded gun capable of mass killings, but I was treated as a criminal for carrying a camera with the intention of helping people.

I am an independent photographer, artist, and journalist. For over thirty years, I’ve traveled around the world capturing images of culture and the human condition, and self-published 12 books of photography on subjects ranging from yoga, to animal conservation, to daily life in China, southeast Asia, Guinea, and Senegal. My work has been published by National Geographic and exhibited globally in art museums and galleries.

Earlier this year, my photojournalism work took me to the Philippines. Walking through the poorest neighborhoods of Manila, I was struck by the dire, heart-wrenching conditions of a neglected population. Currents carry mountains of plastic and industrial waste from Manila Bay and the Pasig River to form toxic cesspools near the Tondo and Baseco neighborhoods, laden with animal and human fecal matter. People have to live from this “dead” water, whether catching something to eat for the day or salvaging items from it to attempt to sell for a living.

For the record, it’s not uncommon in developing areas of the world to see young children unclothed in the streets.

But these children were swimming in toxic water and industrial waste, exposing themselves to cholera, typhoid fever, and other infections. Their parents allow it, even remarking that “we are going to die anyway, so what’s the difference?”

I took hundreds of candid pictures—street style; I posed nothing. Children I met would strike poses of their own when they saw my camera, smiling even in their grim surroundings. Sharing these images will be my way of pleading for help for a community that desperately needs medicine, education, and basic infrastructure. If the world takes notice, perhaps I can help make positive changes.

When I flew home, U.S. Customs and Border Protection detained me—with no explanation.

CBP pulled me aside after a 13-hour flight from Shanghai to Detroit, on my way home to Ohio. No one would tell me why they flagged me, and I still don’t know, but they asked to search my computer. It is possible that I could have avoided five months of psychological stress with three words: GET A WARRANT. But I was sleep-deprived, and innocent of any crime. So I let them. They took my phone, so I couldn’t let my waiting family know why I had missed my connection and wasn’t there when they came to meet me in Cincinnati. It was four hours before I was offered water to drink.

It was another half-hour before an agent read me my Miranda rights. Then he asked me if I had sex with children while I had been abroad.

“What are you doing here?” The agent knew that I was an American citizen, but I had to explain why I was coming to my own home country. I told him I was going to Cincinnati. “After that, where are you going?” I explained I was going to Dallas to meet with my wife, who was doing a training for Montessori education. He seized on that. “Does she teach children?” No, I explained. She teaches adults who teach children. “So why are you going to Dallas?” To be with my wife, and to photograph while I was there. His eyes widened when I said that, as though I had admitted to some kind of suspicious behavior.

I tried to explain the work that I do. They looked skeptical at my simple point-and-shoot camera, and told me I should have papers showing that I was a “real” photographer. They compared my images with drugs, as though I were smuggling contraband into the country. I was told that I should “learn a lesson” and “consider myself lucky,” because the supervisor believed me just enough not to lock me up.

When they were done, they kept my computer, my camera, and my smartphone, and the tens of thousands of photographs on them. Not just those from Manila, but also irreplaceable life moments with my wife and family.

Without my equipment or pictures, I was forced to halt my work. I had given my word to meet publication deadlines, but was suddenly unable to meet them. Over a month later, I finally received an official Notice of Seizure telling me that my equipment had been seized because it contained “visual depictions of sexual exploitation of children.”

To be accused of being associated with child oppression makes me physically ill. I am a professional photographer. This is my art, my work, and my life.

Lawyers from the ACLU of Ohio wrote a formal petition to CBP on my behalf. They explained that my work is valuable artistic expression, and protected by the First Amendment. Seizing my equipment was a violation of my constitutional rights. The National Coalition Against Censorship, along with the ACLU and other artistic and free-speech advocates, submitted another letter urging CBP to return my equipment.

Three months after they seized my equipment, CBP finally admitted there was nothing wrong with the pictures.

CBP promised to return my equipment, but only if I signed a release disclaiming my right to sue them for the wrongful detention and seizure. If I didn’t sign it, they said, I would have to go through a formal hearing process that could take many more months.

I made arrangements to pick up my equipment when I next passed through the Detroit airport. Incredibly, CBP stopped me again, and again they asked to search my belongings. I still don’t know why. Luckily, I carry the ACLU’s petition letter with me, right next to CBP’s letter admitting I did nothing wrong. I showed these letters to them, and eventually they let me go.

This time, when I left, I took all my equipment and all my pictures with me.

Freedom of expression, freedom of speech, and freedom of the press are not exclusive to America. These virtues speak to the fundamental nature within all human beings. The U.S. constitutional rights have worldwide appeal, because they contain the universal respect for the life-given Human Constitution that resides in us all. But those rights, these virtues, are under constant assault, now as much as ever. They must be defended, every single day.

I dream of a world where pictures for social change are no longer necessary. But until then, I will continue to do my work: to give voice to people like those children in Manila. I hope now that their voices will be heard.

I am incredibly grateful for the ACLU of Ohio’s timely intervention into this situation. Without guardians of our individual rights my work, my pictures, and the chance to help those children in Manila might have been lost forever.

Posted by Monroe Gallery of Photography at 3:51 PM No comments: 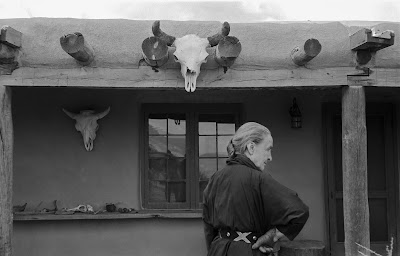 ALBUQUERQUE, N.M. — When photographer Tony Vaccaro first met Georgia O’Keeffe in Abiquiú 1960, the artist refused to speak to him for five days.

On assignment from Look magazine, Vaccaro had traveled to New Mexico by train with art editor Charlotte Willard.

Suddenly, the topic turned to bullfighting. Vaccaro mentioned he had photographed the great Spanish matador Manolette.

The artist pivoted in her seat to face him. She never looked at Willard again.

“Georgia O’Keeffe kept me waiting for over a month,” the 96-year-old Vaccaro said in a telephone interview from his home in Long Island City, N.Y. “She wanted nothing to do with this kid. At that time I was pretty young and naive. She said, ‘Talk to me about Manolette.’ After that, we became great friends.”

That perseverance served Vaccaro well during World War II and on film and fashion sets across a nearly 80-year career. Santa Fe’s Monroe Gallery of Photography is hosting “Tony Vaccaro: La Dolce Vita,” an exhibit of more than 40 photographs through Jan. 19, 2020.

Vaccaro was drafted into World War II at the age of 21. By the summer of 1944, he was on a boat heading toward Omaha Beach six days after the first landings at Normandy. He was determined to photograph the war, bringing his portable 35mm Argus C-3. He fought on the front lines, developing his photos in combat helmets at night and hanging the negatives from tree branches.

When it all ended, he shot “Kiss of Liberation: Sergeant Gene Costanzo kneels to kiss a little girl during spontaneous celebrations in the main square of the town of St. Briac, France, Aug. 14, 1944.”

“I stopped at a cafe and suddenly I see this GI and this little girl kneeling down,” Vaccaro said. “I quickly race there and he started to kiss this little girl three times: to the left and to the right and back again.”

Kiss of Liberation: Sergeant Gene Costanzo kneels to kiss a little girl during spontaneous celebrations in the main square of the town of St. Briac, France, August 14, 1944,” by Tony Vaccaro.


Vaccaro credits an abusive childhood with helping him survive the carnage. He was orphaned when he was 4 years old, when he was adopted by an uncle in Italy.

He had no idea how to raise a child,” Vaccaro said. “I was black and blue from this man. I had become like an animal to go into every little hole or corner to survive the war.”

After the war, Vaccaro remained in Germany to photograph the rebuilding of the country for Stars And Stripes. Returning to the U.S. in 1950, he started his career as a commercial photographer, eventually working for virtually every major publication: Look, Life, Harper’s Bazaar, Town and Country, Newsweek, and many more. Vaccaro went on to become one the most sought-after photographers of his day, photographing everyone from President John F. Kennedy and Sophia Loren to Pablo Picasso and Frank Lloyd Wright.

The 1960s found him on the film sets of Federico Fellini’s “8½” and “La Dolce Vita.” One image shows a bevy of women posing from the windows of a three-story house.

“One of those houses was really a house of ill repute,” Vaccaro said of “Extras on the set of ‘8½.’ ”

His attention turned to the woman displaying her legs from a window on the lower left.

“Those are all wonderful models,” he continued. “I’m aware one of the ladies was a girl who played around with men.”

He still carries a camera and puts in six or seven hours daily without a break, creating prints in his studio and identifying jobs for his staff. On Nov. 1, he was inducted into the International Photography Hall of Fame and Museum.


Posted by Monroe Gallery of Photography at 12:10 PM No comments:


Kenneth Jarecke interviews Tony Vaccaro for "Talking Pictures". Tony's exhibition "La Dolce Vita" is on view through January 26, 2020 - you will also see his work with Monroe Gallery at Photo LA and Paris Photo NY/AIPAD in 2020.

Kenneth Jarecke (born 1963) is an American photojournalist, author, editor, and war correspondent. He has worked in more than 80 countries and has been featured in LIFE magazine, National Geographic, Sports Illustrated, and others. He is a founding member of Contact Press Images. He is notable for taking the famous photograph of a burnt Iraqi soldier that was published in The Observer, March 10, 1991.

Posted by Monroe Gallery of Photography at 7:54 AM No comments: