Several of Stephen Wilkes' photographs from the aftermath of Hurricane Katrina will be featured in the forthcoming exhibition "Remnants". The exhibition of large-scale color photographs (up to 50 x 80 inches) of the environment and the environmental remnants left behind either by nature or man will be at Monroe Gallery of Photography October 2 - November 22, 2015. 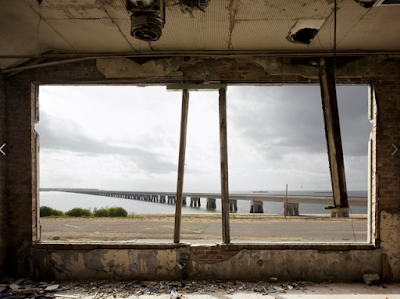 
"In February of 2006, six months after Hurricane Katrina, I traveled to New Orleans to document the devastation, instead I found hope. At town meetings, I met survivors determined to rebuild their homes and communities in the face of insurmountable odds. I was in awe of their inner strength. I wanted to give voice to those that had been all but forgotten; I wanted their stories to be told. Of varied backgrounds, professions, and ethnicities, a thread ran through everyone I met—a deep sense of faith and an enduring sense of hope.


I am at a loss to describe them as anything short of heroic. I hoped their stories would inspire others to return to the Gulf Coast, and help maintain focus on an area whose story, ten years ago, was only just beginning."

See more of Stephen Wilkes's photographs from the aftermath of Hurricane Katrina on his Instagram feed this week.

Related: Before his Iris Nights lecture at the Annenberg Space for Photography, Stephen Wilkes discussed photographing New Orleans after Hurricane Katrina
Posted by Monroe Gallery of Photography at 1:57 PM No comments:

Don’t Stop the Presses: An evening to celebrate free speech

Monday, August 24 at 7 p.m. at the Jean Cocteau Cinema in Santa Fe!


From Charlie Hebdo in Paris to the Rio Grande Sun here in Northern New Mexico, the press and free speech are under attack. Join with the New Mexico Foundation for Open Government, the New Mexico Press Association and The Santa Fe New Mexican by sponsoring a screening of The Sun Never Sets.


This critically acclaimed documentary showcases Espanola’s Rio Grande Sun newspaper and its fearless, honest investigative reporting. Watch the trailer about the film here. The film was written, directed and produced three years ago by Benson Daitz, who will be present for the screening and participate in a panel discussion to be held after the film. Also on the panel will be Greg Williams, FOG president; Bob Trapp, editor and owner of The Sun; and Ray Rivera, editor of The New Mexican.

The Sun was recently the victim of an arson attack, and The New Mexican, the NMPA and FOG stand in solidarity with The Sun. We are proud to present the film and host an interactive panel of First Amendment experts discussing how to protect and celebrate free speech!

Register to attend the event here. Individual tickets are $20 each. Or for $50, you’ll receive your ticket for the screening and a one-year FOG membership. Sponsorship opportunities are also available!
Posted by Monroe Gallery of Photography at 10:36 AM No comments:

Journalists charged months after being arrested in Ferguson

Via The Committe To Protect Journalists


New York, August 11, 2015--Two U.S. journalists have been charged in Missouri with trespassing and interfering with a police officer nearly a year after they were detained by police in the city of Ferguson, according to news reports. Wesley Lowery, a reporter for The Washington Post, and Ryan J. Reilly, a reporter for the Huffington Post, were briefly detained in August 2014 while working out of a McDonald's restaurant in Ferguson to cover protests following the fatal shooting by police of unarmed teenager Michael Brown, according to news reports. If convicted, the two face a possible fine of $1,000 and up to a year in jail, according to the county's municipal code.


"U.S. authorities have no business hauling reporters into court for doing their jobs, especially on a world story like Ferguson," said CPJ Deputy Director Robert Mahoney. "We are appalled by this judicial intimidation of Wesley Lowery and Ryan Reilly and call on St. Louis authorities to drop all charges immediately."
Lowery said that he received a summons to appear in a St. Louis County court on August 24, according to The Washington Post. The summons said he would be arrested if he did not appear. Cordell Whitlock, a spokesman for the county executive, said that Reilly had been issued a summons on the same charges, the report said. CPJ and other groups in 2014 documented the widespread harassment and detention of journalists who covered the unrest in Ferguson. At least 11 reporters were detained between August 13 and 19, and journalists reported being threatened by police, hit with rubber bullets, and affected by tear gas. Other reporters said they were threatened by crowds who were protesting and, in some cases, looting during the unrest, according to news reports.


Sign the petition: Tell St. Louis County: Journalism Is Not a Crime

Rember When?   HERE WE GO AGAIN: OCCUPY WALL STREET ARRESTS JOURNALISTS
Posted by Monroe Gallery of Photography at 10:45 AM No comments:

Caption from LIFE "Children in Watts grow up with the signs of fear, desperation and hatred all around. The words painted last August on this little grocery store, telling rioters that it is owned by a Negro and urging them to burn something else, were left on the walls for months afterwards -- just in case." Photography by Bill Ray.

The Watts Riot, which raged for six days and resulted in more than forty million dollars worth of property damage, was both the largest and costliest urban rebellion of the Civil Rights era. The riot spurred from an incident on August 11, 1965 when Marquette Frye, a young African American motorist, was pulled over and arrested by Lee W. Minikus, a white California Highway Patrolman, for suspicion of driving while intoxicated. As a crowd on onlookers gathered at the scene of Frye's arrest, strained tensions between police officers and the crowd erupted in a violent exchange. The outbreak of violence that followed Frye's arrest immediately touched off a large-scale riot centered in the commercial section of Watts, a deeply impoverished African American neighborhood in South Central Los Angeles. For several days, rioters overturned and burned automobiles and looted and damaged grocery stores, liquor stores, department stores, and pawnshops. Over the course of the six-day riot, over 14,000 California National Guard troops were mobilized in South Los Angeles and a curfew zone encompassing over forty-five miles was established in an attempt to restore public order. All told, the rioting claimed the lives of thirty-four people, resulted in more than one thousand reported injuries, and almost four thousand arrests before order was restored on August 17.

Throughout the crisis, public officials advanced the argument that the riot was the work outside agitators; however, an official investigation, prompted by Governor Pat Brown, found that the riot was a result of the Watts community's longstanding grievances and growing discontentment with high unemployment rates, substandard housing, and inadequate schools. Despite the reported findings of the gubernatorial commission, following the riot, city leaders and state officials failed to implement measures to improve the social and economic conditions of African Americans living in the Watts neighborhood. The Civil Rights Digital Library

Bill Ray's photographs from Watts are included in the exhibition "The Long Road: From Selma to Ferguson" through September 27, 2015.

A year after the Watts Riots in 1965, LIFE magazine revisited the neighborhood through a series of color pictures by photographer Bill Ray. (Via Time.com)

Posted by Monroe Gallery of Photography at 8:19 AM No comments:

"Whitney Curtis has covered Ferguson, Mo., for The New York Times since the day Michael Brown was shot and killed by a local police officer a year ago. Her photos of the protests that followed were published on the front page of The Times, and in many other publications around the world. And they were featured on Lens. For the last few weeks she has been photographing in Ferguson, looking for what has changed, and what has not, over the last year. She spoke with James Estrin earlier this week about her recent experiences there. The conversation has been edited."--   Full article here.

Monore Gallery of Photography  is  honored to present a special panel discussion on the role of photojournalism in the civil rights movement up to the present day.  Freelance photojournalist Whitney Curtis, veteran LIFE magazine reporter Richard Stolley and interim director of the UNM Art Museum and dean of the College of Fine Arts Kymberly Pindar will share their experiences on Friday, September 18, starting promptly at 5:30. Seating is limited and will be on a first come basis. The discussion at Monroe Gallery will take place in the gallery during the final week of the exhibition "The Long Road: From Selma to Ferguson", which closes on September 27.

Many of the now iconic photographs of the Civil Rights Movement in the United States were once front-page news. The year 2015 brought renewed attention to many of these historic images not only from the 50th anniversary of Martin Luther King's march and the acclaimed film "Selma" but also as Baltimore, Charleston, and Ferguson, Missouri, and other American cities grapple with conflicts across the racial divide and produce new images that have confronted American society anew with questions of equality.

Richard Stolley already had a distinguished career in journalism when he joined Time magazine in 1953. As a reporter for Time and LIFE he covered numerous civil rights stories during the 1960's, of which he has said "There would not have been a civil rights movement without journalism. I think LIFE magazine was the most influential publication in changing American attitudes toward race because other news magazines would tell you what was happening and LIFE magazine would show you. LIFE photographers captured images of people spitting on black kids. Those people landed in a great big photo in the magazine, their faces distorted with hate, and spit coming out of their mouths. That image is going to change peoples' attitude in a way that words never could. That is exactly what LIFE magazine did week after week after week."

After graduating with a degree in photojournalism from the University of Missouri-Columbia, Whitney worked as a staff photojournalist at The Kansas City Star, northern Utah’s Standard-Examiner, and the Daily Herald in suburban Chicago. As an editorial photojournalist, Whitney’s work has been honored by The Associated Press, NPPA’s Best of Photojournalism, CPoY, and Women in Photojournalism. A resident of St. Louis, Whitney was not surprised by the outpouring of anger and emotion after a police officer killed Michael Brown in Ferguson, Mo. What she did not expect, however, was to be caught in the middle of it. She covered the 2014 protests extensively, often on assignment for The New York Times. Her image of image of Rashaad Davis from the Ferguson, Missouri protests was awarded 1st place Domestic News 2014 in NPPA's Best of Photojournalism Contest.

Kymberly Pindar is the interim director of the UNM Art Museum and dean of the UNM College of Fine Arts. Pindar is co-curator of the exhibition "Necessary Force: Art of the Police State" which will run from September 11 through December 12, 2015 at the UNM art museum. This exhibition interrogates law enforcement’s longstanding history of violence, and the systemic forces that continue to sanction and promote the violation of civil rights in this country. Dr. Pinder holds two master’s degree and a Ph.D. in art history from Yale University.

Review: The Long Road: From Selma To Ferguson

The Santa Fe New Mexican Pasatiempo: "The Long Road: From Selma to Ferguson couldn’t be more timely"
Posted by Monroe Gallery of Photography at 9:59 AM No comments: