Exhibition of Photographs by Andreas Feininger

February 13 - April 5
Monroe Gallery of Photography, 112 Don Gaspar, is pleased to announce an exhibition of photographs by Andreas Feininger. The exhibition opens Friday, February 13 and continues through April 5.

Feininger’s pictures of New York in the 1940s and ’50s helped define, for all time, not merely how a great 20th century city looked, but how it imagined itself and its place in the world. With its traffic-jammed streets, gritty waterfronts, iconic bridges and inimitable skyline, the city assumed the character of a vast, vibrant landscape. Featured in the exhibition are many of Feiniger's most iconic New York cityscapes, as well as many other

Andreas Feininger was born in Paris, educated in the Bauhaus, and trained as an architect and structural engineer. He began using the camera in the early 1920’s as a “mechanical sketchbook” for building designs. Son of the acclaimed artist Lyonel Feininger, Andreas Feininger turned to photography full-time in 1932.

Andreas Feininger devoted his life to a full exploration of both the science and art of photography. His creative vision is rooted in the conviction that the camera is superior to the eye, and that the photograph can, and ideally should, portray the world more graphic than reality itself. From his earliest photographs, through two decades as a LIFE magazine photographer, to recent images taken in the 1980’s, few photographers in the 20th century have displayed the range of Andreas Feininger.

Feininger’s work is characterized by an unusual sensitivity to form and an extraordinary sense of composition. His photographs reveal hidden structure and beauty in panoramic urban and industrial landscapes. Feininger has said “The city has attracted me since my earliest days as a photographer. But in time this love has grown to include all the aspects of the city - not only its buildings, but also its people, cars, traffic jams, confusion, and even ugliness. I see the city as a living organism: dynamic, sometimes violent, and even brutal.”

Andreas Feininger has been the subject of over 50 books, including several text-books which he has authored. He was a leading staff photographer at LIFE magazine, completing over 430 assignments. His work has appeared in numerous other publications throughout the United States and Europe. In 1983, the British Broadcasting Corporation included Andreas Feininger in a six-installment television documentary about the most important living photographers; the other featured photographers were: Ansel Adams, Bill Brandt, Alfred Eisenstaedt, André Kertész, and Jacques-Henri Lartigue.

Posted by Monroe Gallery of Photography at 2:46 PM No comments:

Stephen Wilkes Lecture at the Annenberg Space for Photography

Via the Annenberg Space for Photography

Evolution
February 12, 2015  6:30 PM Pacific Standard Time
Lecture
Stephen Wilkes shares his personal evolution as a photographer and focuses on a selection from his various bodies of personal work, including his documentary photography on Hurricane Katrina and Sandy.
Watch live here
Posted by Monroe Gallery of Photography at 5:00 AM No comments:

Joe McNally is the #1 Most Inspiring Photographer (Again) 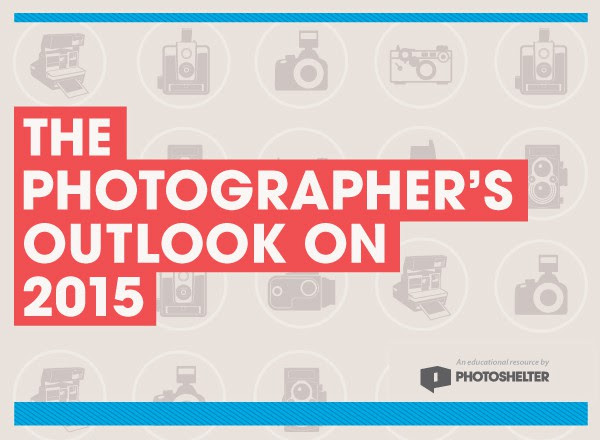 2015 Survey Results: Joe McNally is the #1 Most Inspiring Photographer (Again)

Via Photoshelter
For the third year running, we’re excited to release our annual survey results from The Photographer’s Outlook on 2015. This survey, sent to thousands of photographers worldwide from the greater PhotoShelter community, aims to provide the industry with a solid understanding of what photographers hope to accomplish in the coming year – including how they plan to invest their money, hone their craft, and build a presence online.


As we did in 2014, this year’s survey compares the similarities and differences between the business goals and challenges among photo enthusiasts and professional photographers.* The survey includes responses from 7,408 people total.
For the complete overview of The Photographer’s Outlook on 2015, download the full survey results here.
﻿
Posted by Monroe Gallery of Photography at 5:00 AM No comments: