A half-century after President Lyndon B. Johnson signed the landmark Civil Rights Act, CBS News' Bob Schieffer hosted a symposium on Americans' historic fight against segregation, and the continuing struggle for equal rights for all. In this preview, the tumultuous summer of 1964 is reviewed, when three civil rights workers went missing. It also explores the impact of the civil rights movement through first-hand accounts of the activists and public figures who continue to fight for social justice today

Posted by Monroe Gallery of Photography at 9:58 AM No comments:

In the hot and deadly summer of 1964, the nation’s eyes were riveted on Mississippi.

﻿
Over ten memorable weeks known as Freedom Summer, more than 700 student volunteers joined with organizers and local African Americans in an historic effort to shatter the foundations of white supremacy in Mississippi, the nation’s most segregated state. The summer was marked by sustained and deadly violence, including the notorious murders of three civil rights workers, countless beatings, the burning of thirty-five churches, and the bombing of seventy homes and community centers.

Directed by award-winning documentary filmmaker and MacArthur "Genius" Fellow Stanley Nelson (Freedom Riders, The Murder of Emmett Till), FREEDOM SUMMER highlights an overlooked but essential element of the Civil Rights Movement: the patient and long-term efforts by both outside activists and local citizens in Mississippi to organize communities and register black voters — even in the face of intimidation, physical violence and death. The Freedom Summer story reminds us that the movement that ended segregation was far more complex than most of us know.

American Experience will broadcast the film this summer, which marks both the 50th anniversary of Freedom Summer and the one-year anniversary of the Supreme Court's Shelby County v. Holder decision, which struck down key protections afforded by the landmark civil rights legislation borne of the political momentum generated by this historical movement — The Voting Rights Act of 1965.

Posted by Monroe Gallery of Photography at 10:24 AM No comments:

Steve Schapiro: "Be Happy", Fourth of July, Michigan City, Indiana, 2000
Posted by Monroe Gallery of Photography at 6:24 AM No comments: 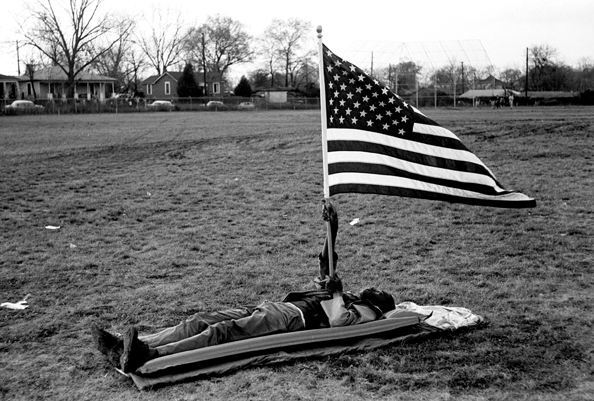 It's almost automatic. When locals think Fourth of July in Santa Fe, Pancakes On The Plaza comes to mind first. From the deliciousness of the pancakes to the cool cars on display ... from the toe-tapping music to the unique art show, Pancakes On The Plaza has something for everyone. And as it brings the communities of Santa Fe and Northern New Mexico together to celebrate our nation's birthday, the proceeds generated from Pancakes on the Plaza make a big difference in the lives of people in need.

Get All Your Pancake Info here


Then, stroll over and preview the Steve Schapiro exhibition "Once Upon A Time in America". The gallery will be open Friday, July 4 from 9 to 3, and Saturday July 5 from 10 - 5. There will be a public reception welcoming the renowned photographer Steve Schapiro to Santa Fe and celebrating the official opening of his exhibit from 5 - 7 Saturday evening.

Posted by Monroe Gallery of Photography at 10:21 AM No comments:

Via The Santa Fe Reporter
July 1, 2014
By Enrique Limón


More than 50 iconic photographs by LIFE veteran Steve Schapiro go on display this Saturday at Monroe Gallery’s Once Upon a Time in America.


Over the last five decades, Schapiro has documented the transcendent and the mundane surrounding some of the country’s greatest battles, accomplishments and cultural milestones—ranging from Robert F.Kennedy’s 1968 presidential campaign to candid moments depicting Marlon Brando on the set of The Godfather.


A lifelong practitioner of the craft, Schapiro developed a love for photography at age 9, when he would try to emulate the shots of the father of photojournalism, Henri Cartier-Bresson.


“This is a show about America and different aspects of America,” Schapiro tells SFR from his Chicago home.


“It was really a turning point, in the sense that so many people were mobilized,” Schapiro reminisces, “because, really what a lot of the Civil Rights movement was about was trying to energize people in the South—particularly black people—to vote and to feel that it was safe to vote and that they could vote, despite the fact that the culture of the times was against them.”


Witnessing several interruptions and threats of violence during the marches, Schapiro kept on shooting and at one point captured a youth resting under the shadow of an American flag.


“It’s symbolic of the spirit that kids have regarding their feelings that things were only going to get better, and that nonviolence was the proper course to take."


That particular picture wasn’t selected by magazine editors at the time, but was like many in his oeuvre, one that came to be by chance after he went through his old contact sheets.


“Sometimes you look at pictures and you don’t know why they’re iconic or why people relate to them,” he says. “It’s a subtle thing, but there are just moments where all of that happens and the image presents a statement that goes in some ways beyond what you’re seeing.”

STEVE SCHAPIRO: Once Upon A Time In America


Join us Saturday, July 5, from 5 - 7 PM for a public reception with Steve Schapiro for the opening of the new exhibition "Once Upon A Time in America".


Steve Schapiro discovered photography at age of nine at a summer camp. Excited by the camera's potential, he would spend the next decades prowling the streets of his native New York trying to emulate the work of the great French photographer Henri Cartier-Bresson. Schapiro was a disciple of the great photographer W. Eugene Smith, and shared Smith's passion for black and white documentary work. From the beginning of Schapiro's career, he had already set a mission for himself: to chronicle the "American Life". His career in photography began in 1960 with personal documentary projects on "Arkansas Migrant Workers" and "Narcotics Addiction in East Harlem". Schapiro became involved in many civil rights stories including the Selma March and covering Martin Luther King; he traveled with Bobby Kennedy on his Senate campaign and Presidential campaign; and did photo essays on Haight Ashbury, the Pine Ridge Sioux Indian Reservation, and Protest in America. He photographed Andy Warhol and the New York art scene, John and Jacqueline Kennedy, poodles, beauty parlors, and performances at the famous Apollo Theater in New York. He also collaborated on projects for record covers and related art. As picture magazines declined in the 1970's and 80's he continued documentary work but also produced advertising material, publicity stills and posters for films, including, The Godfather, Rambo, The Way We Were, Risky Business, Taxi Driver, and Midnight Cowboy.

Related: The Santa Fe Reporter  Once Upon a Time… Veteran photog Steve Schapiro serves up poignant history
Posted by Monroe Gallery of Photography at 10:06 AM No comments: