A Tribute To Art Shay: October 6 - November 19 at Monroe Gallery 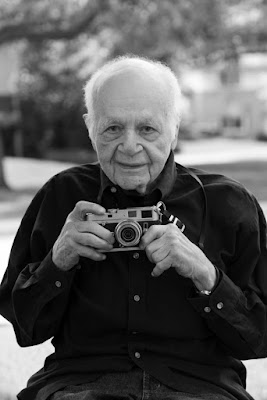 Santa Fe--Monroe Gallery of Photography, 112 Don Gaspar, is pleased to present a major exhibition of photographs from one of America’s most accomplished photographers, Art Shay. The exhibit of 50 photographs opens Friday, October 6 with a public reception from 5 – 7 PM, and continues through November 19.


For over 70 years, Art Shay has documented life, combining his gifts of storytelling, humor and empathy. The Lucie Awards is the premiere annual event honoring the greatest achievements in photography. Art Shay will be honored with the Lucie statue for Lifetime Achievement during the Lucie Awards gala ceremony at Carnegie Hall in New York October 29, 2017.  Below is the announcement from the Lucie Foundation.


“Art Shay’s photography shakes you up, sets you down gently, pats you on the head and then kicks you in the ass.” Roger Ebert


Art Shay was born in the Bronx, New York, in 1922. During World War II, he was lead navigator on 30 missions in the Eighth Air Force. His service, which also include 23 combat supplies missions, earned him five Air Medals, the Distinguished Flying Cross and the French Croix de Guerre. He is credited with shooting down one Focke Wulf 190, a German fighter plane.


Shay has pursued photography since his teens, and he took his first Leica to war with him. His first published photographs—documenting a mid air collision over his English Air Base—were printed in a September 1944 issue of Look magazine. Upon returning to civilian life, Shay wrote Sunday features for the Washington Post before becoming a staff reporter for Life magazine. In San Francisco at age 26, he became Life’s youngest bureau chief. His specialty was story ideas and he wrote text and captions for photographers such as Alfred Eisenstaedt, Peter Stackpole, Wallace Kirkland and Francis Miller.


Shay moved to Chicago in late 1948. A longtime fan of literature, he befriended novelist Nelson Algren, the winner of the first National Book Award for Fiction. Throughout the 1950s, they wandered Chicago documenting Algren’s “rusty heart” neighborhoods. In 1951, Shay left his staff position at Life magazine and became a freelance photographer. He found success shooting for major magazines including Life, Time, Fortune, Ebony, Sports Illustrated, The Saturday Evening Post and The New York Times Magazine. Shay earned a reputation for getting the shots editors wanted. As former editor of Lifeand Fortune Roy Rowan put it, “Art Shay’s extraordinary talent lies in capturing the human spirit of all those who come before his lens.”

Posted by Monroe Gallery of Photography at 2:30 PM No comments:

September at Monroe Gallery of Photography

The acclaimed exhibition "Tony Vaccaro: War and Peace" has been extended through September 24, 2017.

Monroe Gallery of Photography was honored to welcome Tony Vaccaro to Santa Fe for the opening of the exhibition. Among the highlights of Tony's visit was his return  to the location near Georgia O'Keeffe's home where he made his iconic photograph of Georgia holding " "Pelvic Series, Red with Yellow. 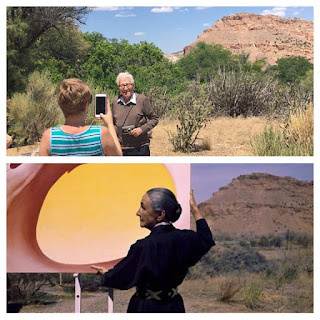 Courtesy of The Tony Vaccaro Studio


In conjunction with the exhibit, Monroe Gallery sponsored two sold-out free screenings of the Emmy Award nominated HBO documentary film “Under Fire: The Untold Story of Private First Class Tony Vaccaro”. The film tells the story of how Tony survived the war, fighting the enemy while also documenting his experience at great risk, developing his photos in combat helmets at night and hanging the negatives from tree branches. The film also encompasses a wide range of contemporary issues regarding combat photography such as the ethical challenges of witnessing and recording conflict, the ways in which combat photography helps to define how wars are perceived by the public, and the sheer difficulty of staying alive while taking photos in a war zone. “Underfire: the Untold Story of Private First Class Tony Vaccaro” was recently nominated for the 2017 Outstanding Historical Documentary Emmy.


Tony Vaccaro, now 94, was the keynote speaker at the recent 100th anniversary of the 83rd Infantry Division reunion in Cleveland, Ohio, August 2-6.

Opening October 6,  the gallery is pleased to present a major exhibition of photographs from one of America’s most accomplished photographers, Art Shay. The exhibit of 50 photographs opens Friday, October 6 with a public reception from 5 – 7 PM, and continues through November 19.

For over 70 years, Art Shay has documented life, combining his gifts of storytelling, humor and empathy. The Lucie Awards is the premiere annual event honoring the greatest achievements in photography. Art Shay, now 95,  will be honored with the Lucie statue for Lifetime Achievement during the Lucie Awards gala ceremony at Carnegie Hall in New York October 29, 2017.

At the same time, renowned photographer Steve Schapiro will receive the Lucie Award for Achievement in Photojournalism. Earlier this year the Gallery presented the exhibition "EYEWITNESS” to celebrate the completion of a project based on James Baldwin’s 1963 book, “The Fire Next Time”. Steve Schapiro’s photographs documenting the civil rights movement from 1963 – 1968 are paired with essays from “The Fire Next Time” by James Baldwin in a major book  published by Taschen in March.

Monroe Gallery is now representing Ryan Vizzions, a respected photographer who occupies Atlanta’s underground art circles. In 2014, Vizzions was awarded a Readers Pick for Best Fine Art Photographer in Creative Loafing’s Best of Atlanta issue. Beginning in September 2016, Vizzions, 33, went to the front lines at Standing Rock, North Dakota, documenting the fight to stop the Dakota Access Pipeline from scarring sovereign Native American land and tunneling underneath the Missouri River. Working as part of the media team for the Sioux Tribe’s Oceti Sakowin Camp, he photographed outside the mainstream media. One of his photograph, titled "Defend the Sacred," has appeared in publications including Newsweek and People magazine’s “Year in Pictures” spread, among others.

Posted by Monroe Gallery of Photography at 12:02 PM No comments: