Via the Brooklyn Museum of Art


Get insider views of Georgia O’Keeffe. Join us for a conversation with a filmmaker and three photographers who worked closely with the artist and made images of her. Participants include filmmaker Perry Miller Adato and photographers Christopher Makos, Tony Vaccaro, and Malcolm Varon. Moderated by Wanda Corn, guest curator of Georgia O'Keeffe: Living Modern.

Monroe Gallery of Photography is honored to represent the photography of Tony Vaccaro. The gallery will present a major retrospective exhibition of Tony's work June 30 - September 17, 2017. Tony Vaccaro, now 94, will be present at the opening Friday, June 30, from 5 to 7 pm.

Posted by Monroe Gallery of Photography at 2:11 PM No comments: 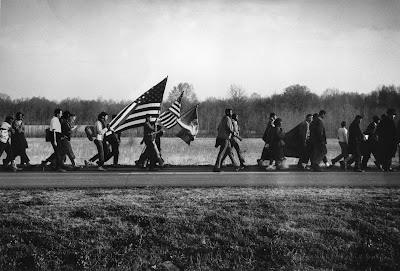 
The current exhibition Steve Schapiro: Eyewitness continues through April 30 in the gallery.

"But before mobile phone videos and Twitter allowed black Americans to directly telegraph their plight to the world, it was up to photojournalism to visualise the message, as Schapiro’s images did in Life magazine."

And the New York Times featured the cover photograph, "CORE Stall In, 1964" from the exhibition announcement in their review of the AIPAD Photography Show last week.