International Acclaim For the Exhibition "Ida Wyman: Life with a camera" 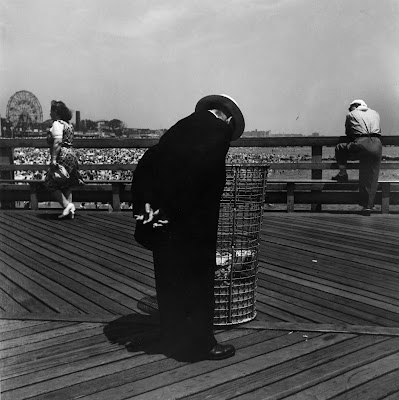 
Today, March 7, would have been Ida Wyman's 94th birthday. The daughter of Jewish immigrants from Eastern Europe, Ida Wyman was born March 7, 1926 in Malden, Massachusetts. The family soon moved to New York, where her parents ran a small grocery store in the Bronx. Her parents bought her a box camera when she was 14, and she joined the camera club at Walton High School, honing her skills at taking and printing pictures. By the time Wyman was 16, she know that she wanted to work as a photographer.

Opportunities then were few for women photographers, but in 1943 Wyman joined Acme Newspictures as a mail room ‘boy’; pulling prints and captioning them for clients.

When the war ended, Acme's only female printer was fired so a man could have her job. Wyman set out on her own to begin free-lance work for magazines, and her first photo story was published in LOOK magazine the same year. By 1948 she was in Los Angeles, working on assignments for LIFE magazine. She would eventually cover over 100 assignments for LIFE.

For the next several years, Wyman covered assignments for LIFE, Fortune, Saturday Evening Post, Parade, and many other leading publications of the time. Ida Wyman passed away in July, 2019. Although not as famous as some of her contemporaries, Ida was one of the defining artists of early street photography that helped shape how we look at our world.

The unsung photographer of the 20th century: Celebrating Ida Wyman

The best photographer you never heard of: Ida Wyman captured 1950s American street life, Hollywood glamour and the euphoria of the Allied victory over Japan - now it's all rolled into one glorious exhibition

Ida Wyman: Life with a camera continues through April 19, and selection from the exhibit will be on view in our booth #A1 during Paris Photo New York Presented by AIPAD at Pier 94 in New York, April 2-5.

Posted by Monroe Gallery of Photography at 10:12 AM