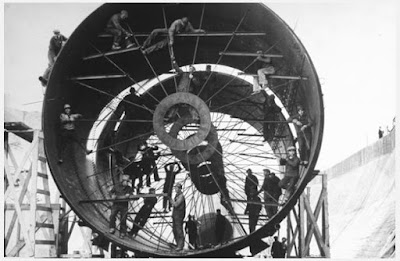 
Via The New York Historical Society

For the editors of LIFE—the first magazine to tell stories with photographs rather than text—the camera was not merely a reporter, but also a potent commentator with the power to frame news and events for a popular audience. For decades, Americans saw the world through the lens of the magazine’s photographers. Between the late 1930s and the early 1970s, LIFE magazine retained few women photographers as full-time staff or on a semi-permanent basis. LIFE: Six Women Photographers showcases the work of some of those women and how their work contributed to LIFE’s pursuit of American identity through photojournalism. The exhibition features more than 70 images showcasing the extraordinary work created by Margaret Bourke-White, Hansel Mieth, Marie Hansen, Martha Holmes, Nina Leen, and Lisa Larsen.

How were these women part of a larger editorial vision? What topics did they cover, and how did their work reflect—and sometimes expand—the mission of the magazine? The exhibit reveals these photographers’ important role in creating modern photojournalism and defining what LIFE editor-in-chief Henry Luce called the “American Century.” Curated by Sarah Gordon, curatorial scholar in women’s history, Center for Women’s History, and Marilyn Satin Kushner, curator and head, Department of Prints, Photographs, and Architectural Collections; with Erin Levitsky, Ryerson University; and William J. Simmons, Andrew Mellon Foundation Pre-Doctoral Fellow, Center for Women’s History.

LIFE: Six Women Photographers is proudly sponsored by Northern Trust. Generous support provided by Joyce B. Cowin, with additional support from Sara Lee Schup and Jerry Speyer. Exhibitions at New-York Historical are made possible by Dr. Agnes Hsu-Tang and Oscar Tang, the Saunders Trust for American History, the Seymour Neuman Endowed Fund, the New York City Department of Cultural Affairs in partnership with the City Council, and the New York State Council on the Arts with the support of Governor Andrew Cuomo and the New York State Legislature. WNET is the media sponsor.

Posted by Monroe Gallery of Photography at 5:30 AM