Monroe Gallery of Photojournalism brings art and history together 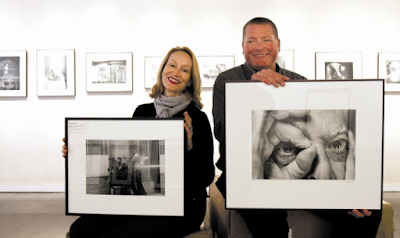 Michelle and Sidney Monroe, owners of Monroe Gallery, celebrate 10 years in Santa Fe of showcasing some of the 20th-century’s most notable news photographers and their works.
- Natalie Guillén/The New Mexican


Via The Santa Fe New Mexican

Monroe, who with his wife, Michelle, is celebrating his 10th year in Santa Fe, was talking about the couple's first meeting in 1985 with famed Life magazine photographer Alfred Eisenstaedt, then in his '80s.

It was at that encounter with the great photographer in the Time-Life Building in New York, Sidney remembers, that "art and history crashed together" for the couple and their venture into photojournalism-as-art began.

Sidney had been working at the Metropolitan Museum of Art, and Michelle, for the Smithsonian Institution offices in New York. The two were engaged.

"We both had separate paths that merged when we met Alfred Eisenstaedt," Michelle said.

Sidney was assembling a collection of Eisenstaedt's works for a gallery he was managing in Manhattan, which even then was considered a risky venture for an art gallery.

Eisenstaedt introduced the Monroes to other news photographers and soon the two had their own gallery. But challenges lay ahead, not only with collectors and dealers dubious about investing in news photos, but with photographers as well.

"Our concept was completely new for them as well," Michelle said. "As photojournalists, they'd never been asked to exhibit."

"It was exhilarating and a struggle at the same time," she said of their start-up gallery in New York. "There were a handful of established photography galleries, but nobody was showing photojournalism."

However, added Sidney, in the long run "we were lucky that we had found something that everybody had ignored."

After Sept. 11, 2001, the Monroes found the going tough at their Grand Street location just a few blocks from ground zero, and other locations seemed unsuitable. So it was off to New Mexico, home of Sidney's parents, whom the Monroes had frequently visited.

The Monroe Gallery of Photography at 112 Don Gaspar St. features the photos of more than 50 renowned news photographers, most in black and white — photographically the predominant shades of the early and mid-20th century.

The photos go back to the Great Depression, through World War II and past the eras of Marilyn Monroe, Martin Luther King Jr., the Beatles, Ronald Reagan and Bill Clinton and into the present with Nina Berman's photos of America's "Purple Heart" warriors of Afghanistan and Iraq.

You may well not recognize, or only vaguely be familiar with, many of the photographers' names — Charles Moore, Eddie Adams, Bill Eppridge or Jeff Widener, for example — but it's likely their photos are part of your or your parents' consciousness:

Moore's photo of King being arrested in Montgomery, Ala., Adams' wrenching shot of the Saigon police chief executing a Viet Cong prisoner, Eppridge's gripping picture of Robert F. Kennedy lying near death on the kitchen floor in the Ambassador Hotel in Los Angeles, and Widener's picture of the Chinese man defying a squadron of tanks in Tiananmen Square.

The Monroes' black-and-white chronicle of the 20th century's iconic news photos is coming to an end in the sense that many of the photographers have died and their prints are no longer available.

"We see the end of an image constantly," Michelle said. "That was the last one that was signed. It's over."

As an example, the Monroes cited many of Eisenstaedt's photos — his famous picture of a menacing Joseph Goebbels, or Winston Churchill in top hat and coat gesturing the V-for-victory sign.

But as the mid-20th century photojournalists fade away, new faces and the faces they shoot emerge. 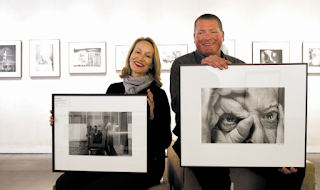 Posted by Monroe Gallery of Photography at 2:30 AM