IT WAS FORTY YEARS AGO TODAY...

...that John Filo looked through the lens of his camera as he took his historic picture on May 4, 1970, after the shootings on the Kent State campus that left four dead and nine wounded. 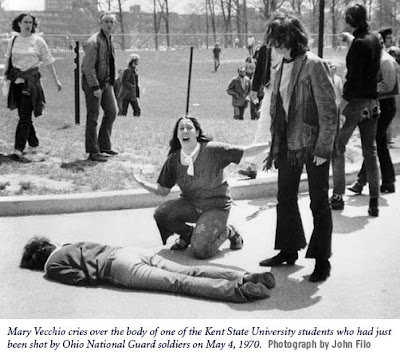 On May 4th, 1970, John Filo was a young undergraduate working in the Kent State photo lab. He decided to take a break, and went outside to see students milling in the parking lot. Over the weekend, following the burning of the ROTC building, thousands of students had moved back and forth from the commons area near to the hill in front of Taylor Hall, demonstrating and calling to an end to the war inj Vietnam. John decided to get his camera, and see if he could get an interesting picture. He saw one student waving a black flag on the hillside, with the National Guard in the background. He shot the photograph, and feeling that he now had recorded the moment, wandered to the parking lot, where a lot of the students had gathered. Suddenly, G company of the Ohio National Guard opened fire. John thought they were shooting blanks, and started to take pictures.


A second later, he saw Mary Vecchio crying over the body of one the students who had just been killed, Jeffrey Miller.  He took the picture.

A few hours later, he started to transmit the pictures he had taken to the Associated Press from a small newspaper in Pennsylvania.


The photograph won him a Pulitzer. To take the picture John used a Nikkormat camera with Tri X film and most of the exposures were 1/500 between 5.6 and f 8.

National Public Radio: "Shots Still Reverberate For Survivors Of Kent State"
"Out in the world, when people talk about the shootings at Kent State University on May 4, 1970, they call it "Kent State." But in the small town of Kent, 35 miles south of Cleveland, and on the university campus, they call it "May 4th."  The full multi-media article is here.

Listen to John Filo recount the making of the photograph here.

Last year, John Filo was reunited with the photograph's subject, Mary Vecchio.
Posted by Monroe Gallery of Photography at 10:02 AM