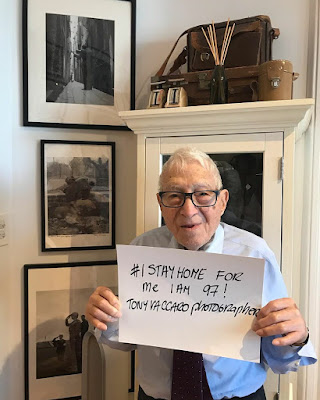 LONDON — Seventy-five years after World War II ended in Europe,
The Associated Press spoke to veterans who endured mortal danger,
oppression and fear. As they mark Victory in Europe Day on
Friday, they also are dealing with loneliness brought on by the
coronavirus pandemic. Here is some of their testimony.

Tony Vaccaro is one of the few people alive who can claim to
have survived the Battle of Normandy and COVID-19.

He was dealt a bad hand early, as his mother died during
childbirth a few years before tuberculosis claimed his father.
By age 5, he was an orphan in Italy, enduring beatings from
an uncle. By World War II he was an American G.I.

Now, at age 97, he is recovering from COVID-19. He attributes
his longevity to “blind luck, red wine” and determination.

To me, the greatest thing that you can do is challenge the world,”
he said. “And most of these challenges I win. That’s what keeps
me going.”

Vaccaro’s grit carried him into a lifetime of photography that
began as a combat infantryman when he stowed a camera and
captured close to 8,000 photographs.

One of his famous images,
“Kiss of Liberation,” showed a U.S. sergeant kissing a French
girl at the end of Nazi occupation.

Vaccaro documented the reconstruction of Europe and
returned to the U.S. where he worked for magazines
such as Look and Life and has fond memories of
photographing celebrities including Sophia Loren, J
ohn. F. Kennedy, Georgia O’Keefe and Pablo Picasso.

Vaccaro lives in Queens, the New York City borough ravaged
by the coronavirus, and next to his family.

He might have caught the virus in April from his son or in
their neighborhood, his daughter-in-law Maria said. He was in
the hospital two days and spent another week recovering.

“That was it,” she said. “He’s walking around like nothing happened.”


Posted by Monroe Gallery of Photography at 10:56 AM