Sent home for their 1968 Olympic protest. Now they’ll get the US Olympics' highest honor 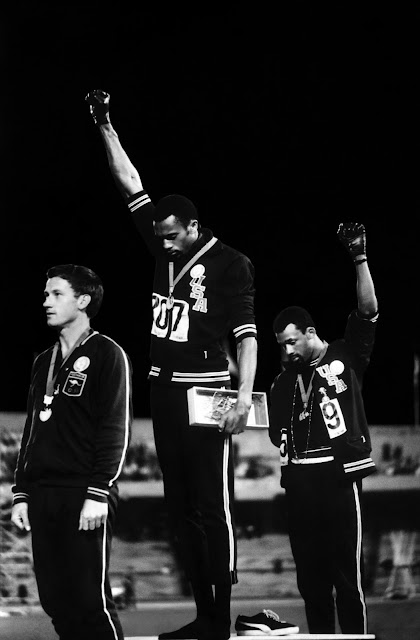 
Tommie Smith and John Carlos are part of the 2019 U.S. Olympic and Paralympic Hall of Fame class that will be inducted later this year.

The sprinters were sent home from the 1968 Mexico City Games after staging a protest by raising their gloved fists on the medals stand. They were long left on the sidelines at the USOPC, but the federation has worked to bring them back inside the family in recent years.

“It sends the message that maybe we had to go back in time and make some conscious decisions about whether we were right or wrong,” Carlos said, according to USA Today. “They’ve come to the conclusion that, ‘Hey man, we were wrong. We were off-base in terms of humanity relative to the human rights era.'”

The class will be inducted at a ceremony in Colorado Springs on Nov. 1. It will be the first class inducted since 2012.

After the 200 meter race at the Mexico City 1968 Olympics, Tommie Smith and John Carlos, Teammates at San Jose State University, and Australia's Peter Norman, went to the awards ceremony. Smith and Carlos flung their fists in the air, and the Australian joined the protest in his own way, wearing a badge from the Olympic Project for Human Rights that they had given him, as he felt compelled to join forces with his fellow athletes in their stand against racial inequality. Smith later told the media that he raised his right, black-glove-covered fist in the air to represent black power in America while Carlos' left, black-covered fist represented unity in black America. The black scarf around Smith's neck stood for black pride and their black socks (and no shoes) represented black poverty in America. Carlos had his tracksuit top unzipped to show solidarity with all blue collar workers in the U.S. Furthermore, Carlos wore beads which he described "were for those individuals that were lynched, or killed and that no-one said a prayer for, that were hung and tarred". Smith and Carlos were suspended from the U.S. team and banned from the Olympic Village. When the US Olympic Committee refused, the Olympic committee threatened to ban the entire US track team. This threat led to the two athletes being expelled from the Games and forfeiting their medals. Peter Norman suffered a heart attack and died on October 3, 2006. Smith and Carlos were pallbearers at his funeral
Posted by Monroe Gallery of Photography at 4:53 PM