The haunting power of old photographs 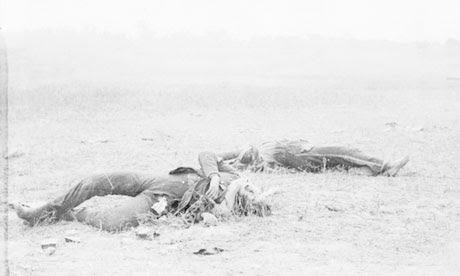 More than just forgotten light ... Confederate soldiers as they fell near the Burnside bridge, Maryland, in 1862. Photograph: Matthew Brady/Alexander Gardner﻿


The haunting power of old photographs

Really look at a photograph of the American civil war and you can be swept on a hallucinatory journey to the heart of a battle
Old photographs have a compelling power. I am talking about really old photographs, from the early days of the medium in the 19th century. Here is light from more than a hundred years ago caught by a camera; here are the faces of the long dead as they really were: the face of Charles Baudelaire, the face of Oscar Wilde.
But how much meaning can a photograph hold? How much depth is there in these flat renderings of silver and black that happened to be caught on ancient chemically prepared plates and preserved? Inexhaustible meaning and daunting depth, it turns out, when you know how to look and how to show these historic pictures.


I recently saw, for the first time, Ken Burns's documentary series The American Civil War. It is well known that the American civil war was one of the first wars to be recorded by photographers. Matthew Brady and other photographers followed the armies in wagons that contained their hefty equipment. They photographed the aftermath of slaughter, the twisted bodies lying in fields.
But it takes Burns's extraordinary eye and technical mastery to reveal all that photography can show of the horrific war that ended slavery in America. For one thing, the sheer range of photographs that Burns discovered in the archives defies belief. Thousands of images have been lost, yet he seems to find records of every place, skirmish and character. It is eerie to watch what comes to feel like a contemporary film of the war, a live newsreel of events from long ago. But the reason it is so haunting is that Burns does not just passively film the images, he digs into them, excavates their secrets.
In one visual coup, the film tells us that future general Ulysses S Grant worked in the family store before the war. Impressively, we are shown a photograph of the Grant family business at the time. But then Burns closes in on a detail: a man standing outside, the image enlarged to reveal that we are seeing Grant himself, hanging about in the days when he was a nobody.
The civil war is full of jaw-dropping images. It becomes hallucinatory, a deathly journey into the heart of the battle: you are there. Photographs, this film revealed to me, are not cold relics of forgotten light; they are landscapes that you can explore as if they were three-dimensional spaces. The civil war is still happening, and will continue to happen for as long as these shadowy imprints survive. This is also true of the pictures of our own time. A photograph is a world frozen, that imagination can warm into life.
Posted by Monroe Gallery of Photography at 6:08 AM