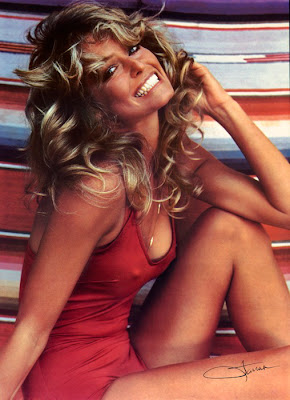 WASHINGTON (AP) — The red swimsuit that helped make Charlie's Angels actress Farrah Fawcett an icon is going to the Smithsonian in Washington.

Fawcett's longtime companion Ryan O'Neal will donate the swimsuit and other items to the Smithsonian's National Museum of American History on Wednesday. A 1976 poster of Fawcett in the dampened red swimsuit sold millions of copies.

Also going to the Smithsonian are Fawcett's copies of scripts for the first season of Charlie's Angels and a 1977 Farrah Fawcett doll.

The items will be part of the museum's popular culture history collection.

Fawcett died in 2009 at the age of 62 after battling cancer.

ABOUT THE MAKING OF THE ICONIC PHOTOGRAPH

The image was released in 1977 as a poster, the same year as when she played Jill Munroe on the TV show Charlie's Angels. It went on to sell a record 12 million copies making it one of the most famous pin-ups ever.


Mike and Ted Trikilis dropped out of Kent State in 1967 to open an art gallery that sold posters. A shipment of anti-war posters soon became their number one bread winner and so they sold the store and became the Pro Arts Inc. They struggled for a few years but then a poster of the Fonz sold more than a quarter-million copies which bumped Pro Arts in the big leagues.

In April of 1976 Ted was working on his farm with the neighbor's son Pat Partridge when Pat wondered  if Pro Arts would make a poster of Farrah Fawcett. He admitted that he and his friends had been buying women's magazines just to get pictures of her from the Wella Balsam shampoo ads. Ted had never heard of Farrah but knew that if students were using ads of her then a poster would be a big seller. He soon got in touch with Fawcett's agent Rick Hersh and tried to get a deal. After Ted finished talking Hersh was puzzled and asked, "What type of product is Farrah to be selling on the poster?" "We want to sell Farrah on the Farrah poster," Ted explained.

Hersh passed the idea on to Farrah who thought it was "cute" and said she had a photographer she like to work with.

When the photo was taken Farrah Fawcett was still an unknown actress wanting to make it big. She hadn't yet signed on for her hit show Charlie's Angels but got some work doing commercials. Bruce McBroom was a freelance photographer who had worked with Farrah before and so Pro Arts agreed to hire him for the shoot. They wanted a bikini shot of the blond beauty.

The shoot was at Farrah's Bel Air, Calif., home of her and then-husband, actor Lee Majors. She did her own hair and they took the photos behind the home by their pool. She modelled several different swimsuits but McBroom didn't get excited about any of the pictures he shot. When she came down in the now famous red one piece swimsuit to cover a childhood scar on her stomach McBroom knew he had something. For the backdrop McBroom grabbed the old Indian Blanket covering his car seat and hung it up, "I should have told people I styled this," McBroom says, "but the truth is it came off the front seat of my '37 Chevy." 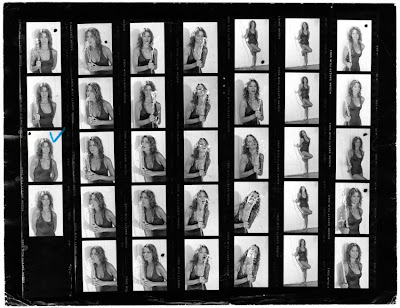 He took a number of shots, using his Nikon, including a sultry Farrah eating a cookie but Farrah chose the final frame that would make her one of the most famous people of the 70's. In the early summer of '76 McBroom sent a package of 25 shots of Farrah indicating which one Farrah wanted to use.

"I've since heard that when the guy in Cleveland got the pictures, he went, "First of all, where's the bikini?" He told me he wasn't ever gonna pay me, because he hated the pictures. But I guess he showed them around to people in his business and they changed his mind. It was Farrah's pose, Farrah's suit, Farrah's idea. She picked that shot. She made a lot of money for him and for herself, and made me semifamous."
--Bruce McBroom

McBroom was paid $1000 for the assignment but is happy to be associated with such a cultural icon. In 2006 on the 30th anniversary of the image, Fawcett, said "I was a little self-conscious [of the image], probably because my smile is so big, but it always more 'me' than any other photograph out there."

Bruce McBroom went on to work as the still photographer on over 65 movies, including "The Godfather Part Two, The Hunt for Red October, ET, City Slickers, Ghost Busters, Sleepless in Seattle, and many more. He now lives near Santa Fe, New Mexico, and his photographs can be seen at Monroe Gallery of Photography.


Source: Famous Pictures: The Magazine
Posted by Monroe Gallery of Photography at 10:16 AM