October 20 is the anniversary of the day General Douglas MacArthur set foot in The Phillipines, fulfilling his pledge to return after withdrawing from the Japanse army advances.

On December 8, 1941, the same day as the attack on Pearl Harbor across the International Date Line, the Japanese also attacked the Philippines by air. Despite a nine-hour warning and for reasons never clarified, most of a considerable American air force was destroyed on the ground. The loss of air cover made it necessary to withdraw the U.S. naval forces, essentially dooming the defense of the Islands against the rapidly following Japanese ground invasion.

The American and Filipino forces fought gallantly, retreating to the Bataan Peninsula and Corregidor Island in accordance with a plan. However, the plan also called for holding out until relief forces could be dispatched. Since neither relief nor evacuation was now possible, President Franklin D. Roosevelt felt it was of paramount importance to extract Douglas MacArthur, the commanding general so that his experience and talents could be employed on the difficult road back.

After more than two years of tough fighting over a wide expanse of the Southwest Pacific, MacArthur was authorized to invade the Philippines. Choosing Leyte rather than the principal island of Luzon as the initial landing site, MacArthur waded ashore in October 20, 1944 and proclaimed to waiting newsmen, "I have returned". He waded in with Philippine President Sergio Osmeña, restaging the landing a second time for the newsreel cameras. The words and pictures were flashed around the world and clearly underlined for an anxious American public how far its armed forces had traveled on the road back from the early disasters.

On December 15, 1944, MacArthur waded ashor in Luzon, and Carl Mydans was there with him. Mydans recalled:

“I thought MacArthur was the most brilliant man I had ever known. I had good moments with him and bad moments. I was with him in Manilla during the first Japanese attacks of the war. I rejoined MacArthur in Leyete, and was the only photographer to accompany him on his command ship the USS Boise for the invasion of Luzon. And I was invited to go ashore with him. As our landing craft neared the beach I saw that the SeaBees has laid a pontoon walkway out from the beach. I climbed the boat’s ramp and jumped onto the pontoons to photograph MacArthur. But in the instant of my jumping, I heard the boat’s engines reversing, and I saw the boat swinging away. Judging from what was happening, I raced to the beach and stood waiting for the boat to come to me. It dropped its ramp in knee-deep water and I photographed MacArthur coming ashore. No one I have ever known in public life had a better understanding of the drama and power of a picture” 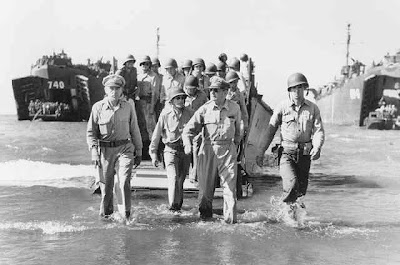 Less than a year later, the general was standing aboard the battleship Missouri in Tokyo Bay accepting the Japanese surrender that ended World War II.


Related: Carl Mydans: The Early Years
Posted by Monroe Gallery of Photography at 8:27 AM