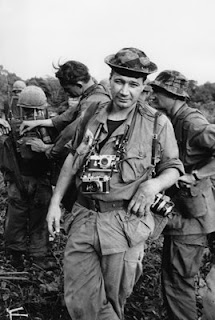 The documentary film about the life and extraordinary career of photojournalist Eddie Adams, "An Unlikely Weapon", continues to garner accolades. (Including winner of Best Documentary at the 2008 Avignon Film Festival in France and New York.)

This is the latest review, by Jonathan White of the Maine Times Record:

LENS AS A WEAPON

Immediate as a photograph, "An Unlikely Weapon: The Eddie Adams Story" traces the biography of famed war and celebrity photographer Adams, who died at the age of 71 in 2004 of Lou Gehrig's disease.This stunning and artistic film, winner of Best Documentary at the 2008 Avignon Film Festival in France and New York, probably tells the story of Adams better than a written biography could. The viewer sees and hears — in Adams' voice and pictures, and the insights of colleagues — an uncompromising photojournalist who rose from small town newspapers to the height of his profession.Despite the fame that came his way, Adams dismissed his work. Of his Pulitzer Prize-winning spot news photograph of a South Vietnamese general personally executing a prisoner on a Saigon street during the 1968 Tet Offensive, Adams, in a filmed interview, says:

"When I seen the picture, I wasn't impressed and I'm still not impressed," and goes on to talk about the light and lack of composition and other deficiencies of the photograph that changed his life — and forms the crux of this narrative.After he took that photograph, the Vietnamese general walked up to him. "He said they killed many of my men and many of your people," Adams recalls.It turns out that Adams, who calls himself "not a good guy" during an interview taped walking the streets of New York interspersed throughout, emphasized with the general. "I think two people's lives were destroyed that day — the general's life as well," he says. "I don't want to destroy anybody's life — that's not my job."

Years later, he visited the former Gen. Nguyen Ngoc Loan, then owner of a pizza shop in Virginia. "You look the same," he told Loan, behind the counter. "You look older," Loan replied. In the rest room, Adams spotted graffiti: "We know who you are."

"He wasn't allowed to forget that photograph," says his son, August. "It followed him around wherever he went."It also became an iconic image, as the film shows in a montage from graphic novels, editorial cartoons and even a rock star's wall illustration.

But that 1/500th-of-a-second photo — along with one of a naked Vietnamese girl running down a roadway after being scalded badly with napalm — did much to change Americans' attitudes toward the Vietnam War. "

History would be changed through his lens," intones narrator Keifer Sutherland — and in an era predating ubiquitous filming devices, that was true.

"Eddie brought the American public face-to-face with the victims," says Tom Brokaw. "It didn't seem like an honorable war after that ... I think it brought home for people the absolute cruelty of that war."

"I think his image was the moment that changed the war," adds colleague and former Life photographer Bill Eppridge, whose own photograph of a dying Robert Kennedy entered the annals of time. "You didn't want to take those pictures," Eppridge says, but they were a record of history.

The documentary follows the arc of Adams' life through recollections and photos — from small town newspaper to The Associated Press (photographing the Beatles' arrival in New York) and later freelance work for Penthouse and Parade magazines, and his founding of Barnstorm, an upstate New York workshop based on talent, not ability to pay. But its crux is Vietnam.

Eppridge recalls how the press corps was given a vacated brothel to live in Da Nang, and Adams' arrival carrying multiple cameras and a holstered .45 — without bullets, for the image's effect. "We would go to all the battles" says Bob Schieffer, helicoptering in and out, earning the respect of troops on the ground. After "covering the war minutely and from the front," Adams wrote to the president of AP asking to come home. It didn't last. "I didn't understand anyone here," Adams says, "people didn't understand that there were guys getting killed." He watched as a New York City cab almost ran over a wounded soldier on crutches "because he wasn't moving fast enough. I was very bitter. Nobody cared." Adams returned to Vietnam in 1967. By then, relations had deteriorated with the military — largely because of press coverage of what was happening. "Photographers like Eddie sensed earlier than most journalists — reporters — did what was really happening because they'd been out there," says Schieffer. "A reporter can write about something if someone tells him about it. A photographer can't get the picture unless he's right there at the place where it's happening, and Eddie was always there ... "People like Eddie Adams were sending pictures back that helped us understand the enormous cost of the war in lives. And that's what the American press did in Vietnam. They did their job and they did it in a noble way.""He didn't approve" of what was happening, Eppridge says. "He'd never come out and say it, but you knew."

Just after the war, in 1977, Adams asked to go to Thailand, to photograph the boat people who were leaving Vietnam and seeking refuge in nearby Southeast Asian nations — which were rejecting them. Most were not allowed to make landfall.Adams bought $100 worth of fuel and bags of rice and raced aboard a 30-foot refugee boat in Thailand, whose 50 or so people were being towed back out to sea. "When you point any camera at children, they will smile at the camera," Adams recalls. "For the first time in my life no one smiled, not even the children."His series of photographs, which he called "The Boat of No Smiles," was later shown to the U.S. Congress during State Department testimony on the plight of the refugees. After that, President Jimmy Carter "opened the doors to all the Vietnamese."I think that's the only thing I did in my life that has been good," says the uncompromising Adams in the film, "but I didn't mean to do it.""He was a wire service photographer who was also a great artist," says Tom Brokaw.In all, he photographed 13 wars, six American presidents and every major film star in the last 50 years.In the on-the-street interview, Adams, in his usual black leather coat and fedora, reflects on his art. "We often wonder why we do the things we do," he says. "Nobody really gives a shit and so you wonder why we put so much of ourselves into something because we all are going to die ... we're disposable. I don't know what the answers are. I've always wanted to be the best. I'm not but I'm still trying ... Maybe one day, if I take the perfect picture, I'll be happy."

The documentary follows Adams to his final days, unable to speak, but still cantankerous, and to his funeral on his farm in upstate New York, where his son August lays his black fedora on the monument to deceased war photographers. Adams, we learned, asked to be buried with a Nikon with a 35mm lens and Kodachrome film so he could "cover the next world."The closing quote, before the credits, is from Adams:"The most powerful weapon in the world has been and can be a photograph.

"An Unlikely Weapon: The Eddie Adams Story," a film by Susan Morgan Cooper, runs 85 minutes.It can be purchased for $24.95 via the Web site http://www.anunlikelyweapon.com/.